If you want to see what else we're making, drop us a follow!

If the controls don't work try refreshing the window. Then click the run button without scrolling or pressing anything else. This is a known problem with HTML5 Itch uploads using this engine.

A young hero is tasked with retrieving a stolen magic clock that can warp space and time. The hero makes it to some ruins, but an ancient trickster spirit has found the clock and wants to have some fun...

Out of Control theme connection: We interpreted this meaning "out of the player's control" rather than "chaotic"

The ancient spirit has the clock and is messing with you. The movement of the room cannot be controlled by the player. It can get out of hand if you do not take time to plan. However, you can interact with objects to influence your own movement and get to the exit, solve the ancient spirit's puzzles, and escape.

Other controls are in the game

The game is currently After Jam version 1.5. With content we didn't get to implement during GMTK Jam because of time.

This was a Jam game and we are not planning on updating it more. But if you like what you see, drop us a follow, check out our other games!

Hmmm am i the only one who cant get the boxes to work?

I pressed Q and everything went black.

Same. I don't think it's intended.

It took a while to figure out what to do with the boxes. The problem in finding it out was that the boxes didn't stay solid if I held the click, I had to repeatedly click the box I was on if I wanted to not fall. I could not jump off of the boxes as they were not solid half the time, I feel as though the idea was to be able to drag your mouse over them seeing the level after the mechanic is introduced. The only current way to get through this currently is with an autoclicker.

It was pretty fun until pressing Q turned the screen black.

me too i can't find it too

The walls are like one big piece so I was pointing gravity down and rotating the walls. Using a circle collider on the player made collisions work at any angle.

(It's not the most efficient way because editing levels is a pain. But when you have 48 hours you do what you can haha)

Same here. I'd love to play!

Is the HTML5 version working?

The same for me as well.

Is the HTML5 version working?

I already played this game during the jam and thought it had one of the most creative and unique concepts. The main mechanic is very clever and gets build upon neatly with the pendulum and the clickable boxes.

I think with some work this could easily turn into a successful full release!

Imo the movement could still improve a lot. For the first few rounds it felt like I was just fighting with the controls to not fall into spikes. The hitbox of the spikes is way too big and you shouldn't be able to get hit from the side. The jump is a little bit too short as it reaches only slightly above 2 tiles and it's very annoying when it misses and you have to do it again. I regulary got some movement bugs where I was unable to move for a short amount of time especially after jumps.

Because you have already working physics in place something like moving crates or rolling barrels would be a great addition as they would also interact with all the other mechanics. The player could move them or when the level turns they could crush the player. Also something like explosives or liquid would be great but I don't know how hard this would be to implement.

The UI could be more clean. Maybe it's just my preference but I'd prefer it if all the valuable information would be right above the playable area and not on the side. Also small and big turns should have different symbols. Then there are also many possibilities for new variety of turns such as full turns or very slow turns.

Lastly it's good in some ways that all the levels have the same size but you could also think about spicing things up, for example asymmetrical levels or levels that go beyond the borders of the screen.

Anyways, I think this is a very clever mix between a puzzle and a platformer and hope you expand on your idea even more in the future!

thanks yonn comments like these are really appreciated by us, the devs! We are in fact working on a new and improved update featuring crates and other fun stuff to play around with! we are always looking for feedback and play testers and this comment is great! I’m Alphons I worked on concept, UI and all art!

Yo’, Templar here, everything is awesome, my only issue would be the controls feel unresponsive at times, but everything else is great.

I love this game so much...the mechanics the gameplay pretty much everything! 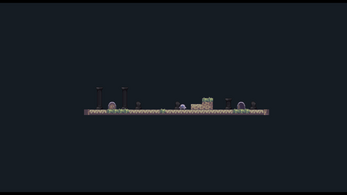 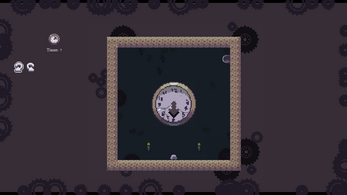 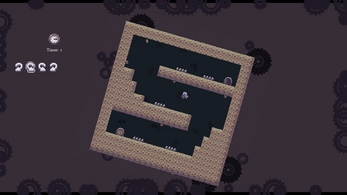